I am writing this blog, not on my laptop, but with paper and pencil, to be typed up later for we have arrived at our next wwoofing stop which is proving to be something of an experience.

(until I can get some of my own photos up, the mountain internet can’t quite manage it, here is a link to another person’s blog talking about this place https://nomadnarratives.wordpress.com/2011/06/19/portal-to-the-past/)

Before coming here we had 3 nights in Queenstown, New Zealand’s adventure sport capital. Here you can go at high speed across land, sea and air as you bike down a mountain, race around the lake in a speedboat or thrown yourself out of a plane or off a ledge. The town is a thriving throng of tourists, mostly people our age seeking a thrill and partying until the early morning. After the isolation of the southlands, I can see why people think Queenstown is too busy. We had a lovely hostel just outside of all this busyness with the most glorious views out across Lake Wakatipu.

We made the most of the great weather and good trails here to do a bit of hiking and also rode the gondola up the mountain to do some luging. It’s a bit like dong real life Mario Kart racing as you roll your way down the hillside. We also sampled some of New Zealand’s most famous export- Lord of the Rings- in a guided tour of some of the movie locations. The tour was lovely, just Katie, me and one other tourist seeing the landscape and hearing how the locals were involved in the production of the films as extras and supporting roles. Even the primary school kids helped paint leaves gold for the scenes set in the Elves’ home.

I finally got to see New Zealand’s other claim to fame and national symbol, the Kiwi, allowing me to finally say I have now achieved the title of this blog and met, seen and eaten a kiwi man, bird and fruit. There is a native bird park in Queenstown with 4 kiwis in nocturnal houses. As your eyes get used to the gloom, they run around quite happily near the glass giving you a chance to see their log beaks, funny bouncing gait and fluffy, fur-like feathers. With no native mammals apart from a few bats, New Zealand’s birds adapted to fulfil the roles usually filled by mammals and so many lost the ability to fly. The other odd thing about Kiwis is the size of their eggs. Kiwis lay almost the biggest egg in comparison to their body weight, almost 30% [citation needed]. It allows the chicks to emerge fairly well developed, although even this doesn’t help them against stoats which are their main predator. Possums are also a threat and if I manage to catch a few more I’ll be doing my part. 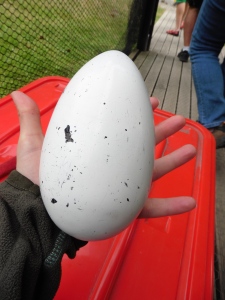 The possums like to play on the tin roof here at night. We are staying in a converted miner’s cottage owned by a very elderly man call Graham Mclean. After a very full life as a chef, film producer and hotel manager, Graham has retired to live the simple life in the cottages he once used as a film set. Life here is very basic. There is no mains water or electricity supply, giving me an idea about what life might have been like for early settler’s here. Grahams is 77, though seems older as he isn’t up to much. He legs ache and only lying down relives them so he sleeps a lot. Hence he needs lots of wwoofers to keep the place going. He doesn’t give much direction and is asleep much of the time anyway so it’s up to you to find jobs to do. Just keeping the place going is hard. Washing water is piped in to the house, though it’s not very clean, coming from a small stream nearby. This also goes to the bathroom which is a very open air affair, next to the garage.

(Loo with a view)

Another stream down a steep edge provides cleaner drinking water which must be carried up to the house and placed in a big copper water butt in the kitchen. Another continual job is to cut firewood. The range here is wood fired, and Graham, as an ex chef, is excellent at getting wonderful meals out of it, there is a small gas ring too but as Queenstown is a fair distance away, and the track is cut into the mountainside, the aim is to try and live as self-sufficiently as possible. There is also a generator, which runs the TV (though it only plays dvds, not actual channels) and two solar panels which runs Graham’s laptop. After a few days being out of contact, apart from making runs down to Queenstown for an internet connection, Graham let me use his internet connection today which is something of a relief. It is my mum’s birthday and missing that, and the rest of the family, on top of feeling a bit overwhelmed here made being able to see a few kind emails so welcome. So keep on emailing me! I may not be able to see them that often, but I can occasionally and it is so heart-warming to find a few kind emails waiting for me. I love to hear about the everyday stuff, it makes me feel like I’m not missing out. My phone, once again, does not have any signal here so texts only get through if I am in town.

So life here is just a lot of effort, apart from Katie and I, there are three other wwoofers, who have also not been here long, though they have made a big difference in fixing things around here like the chainsaw. Tim, a retired American (odd, that sounds like he has retired from being American, anyway) taught me how to use a chainsaw and fell and chop up a tree yesterday which was great fun! It was draining at first but hopefully soon I will be stronger and better with the axe. The other thing that really needs doing here is cleaning, I know I said we didn’t want to do more housework but here it is so needed and makes such a difference that I don’t mind. It’s hard to know where to begin though, and with Graham so elderly, it does make you wonder how long he will be able to manage up here. He spends the winter months visiting family and travels and heard today that his daughter has got a job teaching in Queenstown. I’m very glad, because although there are plenty of wwoofers like us around to help, this place, and Graham, needs more of a long term oversight and care.

Still while he can, he can enjoy the stars up here. The night sky up here truly is magnificent. With no light pollution glittering stars fill the sky, cut off only by the mountains either side of us. The Milky Way glows like a path through a throng of constellations I have not seen before, and at the top, the Southern Cross. We are experiencing something special here, and tough though it is, I am definitely glad of the experience.